Lecture 1: The Making of the Critical Edition

In this lecture, we will talk about the making of #The Critical Edition of the Mahabharata We will cover the need for the project, the history of the project and also a little bit about other editions and stories based on the Mahabharata.

The start to any discussion on the Mahabharata should happen after quoting the following prayer: 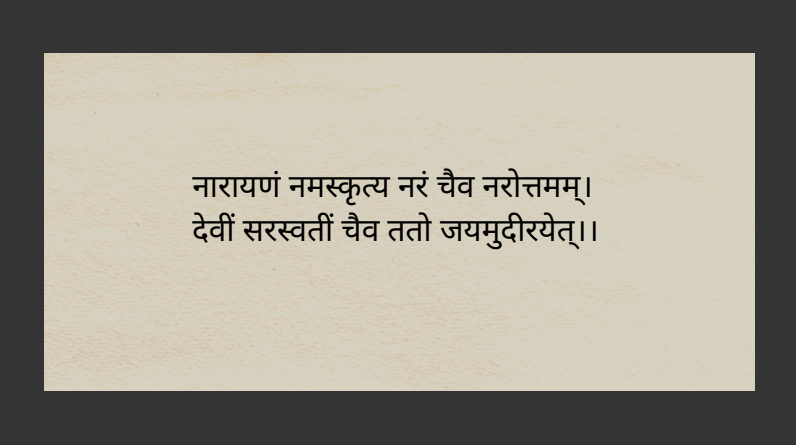 Meaning: “Having bowed down to Narayan and Nara, and also Goddess Saraswati, one should recite the Jaya epic.”

Beginning the work on the Critical Edition

The work on the Critical Edition began under Dr Ramkrishna Bhandarkar. A “Critical Edition” is an attempt to recover the actual work as written by the author himself.

The BORI was set up as a Birthday gift to Dr Ramkrishna Gopal Bhandarkar on his 80th Birthday, 6th July, 1917. Work on the #Critical Edition started in 1919.

On the first anniversary of the institute, 6th July 1918, the Raja of Aundh, Balasaheb Pant Pratinidhi announced a donation of 1 Lakh rupees fhe purpose of commencing the Critical Edition work. He wanted the edition to have paint depicting important events of the Mahabharat. To this end, he commissioned the paintings and donated them to BORI as a gift.

Later, when BORI was in dire need of money, he brought the same paintings back from them so that they would get the money! In this way, Balasaheb Pant Pratinishi was a great patron. Not only his wealth, but his outstanding virtuous qualities were also dedicated to the welfare of others.

On Authenticity: Rigveda vs Mahabharata

We have an authentic version of the Rigveda: written carefully and supported by the systematic, uninterrupted oral tradition of Vedic Chanting. Due to the oral tradition, the Rigveda is free from corruption completely.

The oral tradition is authentic and reliable. You can see this from the fact that there are no / very minor differences between the printed critical edition of the Rigveda and the oral tradition.

This is not true for the Mahabharata and other non-vedic texts.

Editorship of the Critical Edition

Dr V S Sukthankar was the first editor of the #Critical Edition. He said, “The Mahabharat is an amazing mixture of versions”. This was because it was handed down from bard to bard by word of mouth.

Pratap Chandra Roy, the Bengali scholar who brought out a Mahabharata edition at the end of the 19th century had this to say about the Mahabharata:

This was the problem that Sukthankar had decided to solve.

Versions of the Mahabharata

Broadly, we can identify three versions of the Mahabharata:

The mechanism to create a “Critical Edition” is called Textual Criticism. While this is a Western technique, it has been modified by Sukthankar to suit Indian texts. This methodology is called “Indian Textual Crticism”.

This technique has also been used by Indian scholars before. For example Neelakantha, author of Bharatabhavadipa (a famous commentary on the Mahabharata), follows this technique and describes it in the beginning of his text.

“Having collated a number of manuscripts from various regions, having ascertained the best readings, having followed the predecessors, now I begin the writing of the bhavadipa.”

Neelakantha also gives some examples about readings which have changed in different editions of the Harivansha and says that “only Vsaya would now know the real meaning”.

We have better techniques today, which allow us to resolve the doubts Neelakantha had, yet the work of the critical edition is complicated and challenging.

The Adi Parvan (the first parvan) itself is 4 times the size of Illiad and Odyssey put together. (and 1.5 times the Ramayana). Sukthankar realized that the western methodology could not be imitated in totality for analysing the Mahabharata.

We have guidelines for textual criticism, but every text may need a specialized approach. This method has been applied to successfully create critical editions of Ramayan, Bhagvad Puran, etc.

Previous editions of the Mahabharata

Before the #Critical Edition, the most popular editions of the Mahabharata were the Bombay, Calcutta, Kumbhakurna, Madras editions. These are known as recensions. They are so diverse from each other that there prevailed much uncertainty regarding the correctness of the text (which incident happened when and so on)

The critical edition is the remedy to this problem. It is meant to be the source for the common person, to solve the confusion of which version to rely on.

Professor Moriz Winternitz expressed the need for a critical edition of the Mahabharata at the 11th International Congress of Orientalists. After the Congress, he formed the Sanskrit Epic Texts Society, which appointed a committee to consider proposal of critical edition. However, the first great world war proved to be a major blow to this entire initiative.

Narayan Bapuji Utgikar (editor) published the Virata Parvan Critical Edition in 1923 and distributed it to scholars all over the world. The response to it was overwhelming and highly encouraging! This was proof that there was strong interest in a Critical Edition.

The Virata Parvan Critical Edition was based on the vulgate text of the Bombay edition with Neelakantha’s commentary (published in 1883). Sukthankar decided to use this same text as the starting point for the #Critical Edition.

The process of creating a Critical Edition consists of the following phases:

Challenges in creating the Critical Edition

We can appreciate the difficulty of the task when we realize that Sukthankar found 235 manuscripts of just the Adi Parvan itself, in different Indian scripts. There were hundreds of manuscripts, in devasthanas and libraries of rich people and public libraries.

In addition of manuscripts, the #Critical Edition also considered other testimonia - i.e evidence of a partial nature, other than found directly in the manuscripts. These included famous commentaries and poetry written all over India.

In India, we have a tradition of lesser poets ascribing their own work to famous authors (example, poetry ascribed to Kalidas or Mirabai) so that these creative writings get the status of a poem penned by a famous poet. This gives rise to variant readings of the text. Eventually, these changes and additions have a tendency of creeping into the manuscripts and becoming an integral part of the text.

Marginalia added by scribes also gets inserted into the body of text and becomes a part of the work over time. Sometimes, scribes make mistakes when copying texts. There are examples of scribes attempting to fix seemingly “inferior or corrupt reading” based on incorrect understanding of the text and thereby introducing errors and variants.

Purely on the basis of the methodology, the editor (Sukthankar) has to handle these problems carefully and choose the correct variant.

Thus, when making a #Critical Edition, all evidence, even defective evidence, needs to be captured by the editor so that the reader has access to it. All variants and scribe errors are recorded faithfully so that the methodology can be determined as reliable independently at a later time. This is the Critical Apparatus

The editor does not claim that the text is the perfect one or the closest to the autograph.

Dr Sukthankar has done all this work to prepare the constituted text of the Adi Parvan. The critical apparatus and appendix containsrmation. This is why the Adiparva was received with such acclaim!

“The Adiparvan in Dr Suktankar's #critical edition of the Mahabharata is now complete and I have no hesitation in saying this is the most important event in the history of Sanskrit philology since Max Muller’s edition of the Rigveda with Sayana’s commentary” ~ Prof Winternitz.

Reception and Reviews of the Critical Edition

The work on the #Critical Edition was finally complete in 1969, through two generations of scholars. It was unveiled to the public at the hands of the then president of India: Sarvepalli Radhakrishnan.

Like any other sacrifice, the project of the #Critical edition was a huge cooperative enterprise and the credit for it’s fulfilment belongs collectively to all the workers of Bhandarkar Oriental Research Institute.

The Critical Edition received wide acclaim from scholars and eminent personalities from all over the globe. As an example, here is a great review from AL Basham, the author of “The Wonder that was India”:

This #great work of Indian scholarship is a landmark in the history of Sanskrit textual criticism. It seems hardly likely that this book will ever be replaced, it will remain for centuries as a permanent memorial to the scholarship and patience of a devoted band of Sanskritists.